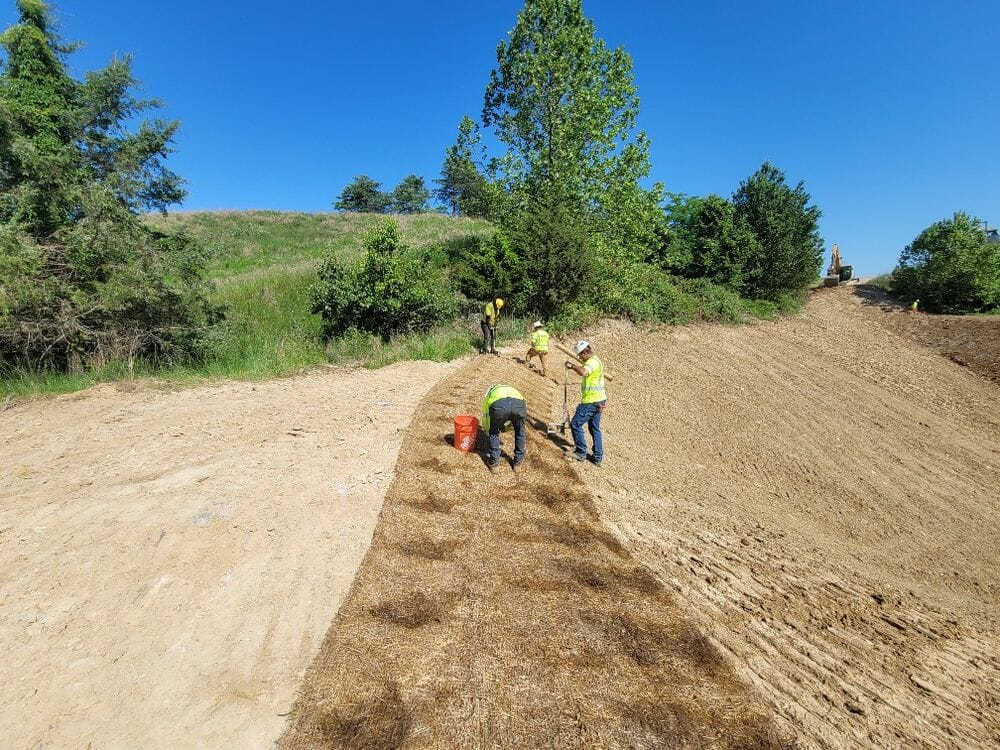 The Benefits of Erosion Control Blankets

The Benefits of Erosion Control Blankets

Erosion is an inevitable aspect of nature. Depending on the climate and the area in which you are working, heavy rainfall and runoff may wash away the topsoil, or dry dirt may be blown away by high-speed winds. Even simple gravity can contribute to soil shifting on steep slopes.

Such events and their impacts are amplified when it comes to construction and land development. During construction activity, vegetation is often damaged and removed, dirt is displaced, and once stable land areas are altered. These activities remove many of the erosion controls put in place by nature, making it easier for construction site erosion to occur and for contaminants and pollutants to find their way beyond the project site to areas where they can threaten infrastructure and water resources.

What are erosion control blankets?

Erosion control blankets serve to prevent the moving or shifting of soil and help to stabilize soil particles and sediments, ensuring that they remain in place to stop sliding due to wind, water, or other causes.

Erosion control blankets tend to be woven from a particular material and are intended to slow down the speed at which water is able to move across the surface. The chosen material normally comes with many obstructions and ridges to help slow the water down.

Common sizes for erosion control blankets include 80 to 100 square yards, most of which are able to be rolled up and cut into many different widths that range from three to eight feet wide.

There are many benefits to using erosion control blankets. They help to protect bare soils, primarily on slopes from the adverse impact of rain. They can also provide a useful layer of mulch that helps to promote the germination of seeds.

Erosion control blankets are also an extremely cost-effective solution to controlling erosion and promoting slope stabilization. With a relatively simple design that consists of layers or natural and synthetic fibers woven together, they cost much less than the majority of erosion control methods. Their effectiveness as a soil stabilization tool also means that time and money are saved by preventing project setbacks caused by erosion.

Another benefit is that it is relatively easy to install erosion control blankets. The biggest issue is to make certain that water will move over the top of them which requires keying the blanket into the slope via the digging of a small trench on top of the slope. The top end of the material should be laid into the trench and made to line it.

This will require the edge to be folded under and then secured with the use of staples. The trench can then be filled in up to the previous level the soil was at. The blanket edge that is upwind will need to be overlapped under the blanket.

Erosion control blankets can be applied to a wide variety of different terrains, with as many as needed able to be laid out beside each other until the desired area has been completely covered. They can also be transported to locations that may not be safely accessible to heavy machinery, for example, the banks of waterways.

Erosion control blankets can be used for a short term of around three months to as long as three years. They can be purchased all over the US, including in Virginia, Maryland, & DC Metro area.

Call 703-560-4040 or email Muller, Inc. at proposals@mullerec.com for more information on erosion control blankets or our other erosion and sediment control services.